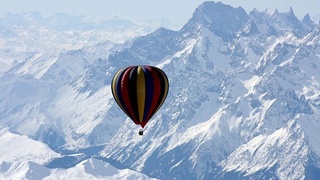 Intrepid travelers with significant means to venture one step above the select group of adventurers who have ascended Everest, by taking a hot air balloon trip above the world’s highest mountain for a cost of £1,680,000 per person.

Offered to couples, the trip is led by Chris Dewhirst, who along with Leo Dickinson became the first balloonist to fly over Everest in 1991. They were shadowed by a crew in a second balloon and theirs remains the only successful balloon voyage over Everest to this day.

This new attempt will invite one couple to join Dewhirst in a balloon and, beyond the financial outlay, requirements are significant. Though the journey itself might only take the better part of a day, participants will potentially have to wait for weeks for appropriate weather conditions. They’ll be expected to be in decent physical shape too, and may be required to commit to a month of physical and skills training if they aren’t as fit, limber and experienced as Dewhirst deems necessary.

Despite the expense there is no guarantee of success and refunds won’t be granted if the voyage fails. The experience is offered through the American experiential-travel website IfOnly, which states that the experience “includes an attempt at crossing Mt. Everest in a hot air balloon, not necessarily the successful completion of that journey”.

An extensive liability waiver will also need to be agreed upon by all parties before the purchase of the expedition (priced on the site at $2,607,500 per person) is completed.

Other attempts to scale the mountain by balloon have ended unsuccessfully. In 1990, a crew of three Japanese balloonists attempted the journey but crashed into the mountain at 18,500ft. One team member broke his leg on impact and their balloon was destroyed in an explosion but all survived. The team following Dewhirst and Dickinson suffered a series of burner failures along the way and made a dangerously rough landing. Scheduled to take place in mid-September, a 2001 attempt by British adventurer David Hempleman-Adams was cancelled following the 9/11 attacks.

The balloon trip package has been launched at a time when more daring travelers are being given fresh opportunities to explore new frontiers. Though besieged by delays, Richard Branson’s Virgin Galactic is still preparing to offer commercial flights to space for a cost of $250,000 (£160,000) per person. In late 2015, World View Enterprises is expected to launch the first World View flights, which will see a small group of passengers within a capsule lifted some 100,000ft (about 20 miles) by an immense, high-altitude balloon.

Back at ground level, a new series of perilous driving tours from Antarctica’s Amundsen Coast to the South Pole commence in November. At sea level, funding has been secured for SeaOrbiter, an oceanic observation vessel that will sail the world’s oceans and explore previously uncharted waters. Members of the public will be able to join journeys on board and assist scientists and marine biologists in their efforts to explore and document the mysteries of the deep.